I started doing Nose Work with my dog Spiffy back in 2010, when it first hit the New England region (like a ton of bricks, I might add). Mostly I wanted something fun and relaxing to do with my dogs, and this really fit the bill. Spiffy is a mixed breed rescue dog. I’ve had him for 11 years, since he was about two years old. 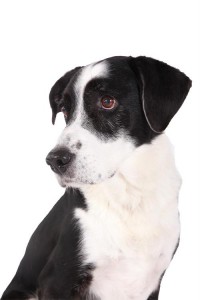 Spiffy and I trained with Gail McCarthy, CNWI (scentinelnosework.com) from the very beginning. It was a good thing she used wooden boxes, because he is one mouthy son-of-a-gun. To say he is enthusiastic about nose work would be a gross understatement. It has been both a challenge and a blast to train him for the sport, and has really strengthened the bond between us.

He passed all of his ORTs on the first try, despite giving me a heart attack on the Anise round in Seekonk. Then he surprised me by earning his NW1 on the first try with a High in Trial and Harry Award. He earned his NW2 on the first try also, plus a bonus one. And now we are onto the NW3 Elite title, with two NW3 titles down and one to go.

Our tenth attempt at NW3 was last Saturday, on lovely Cape Cod, Massachusetts. Our previous attempt had been just one hide shy of the title. I was excited about the Mashpee trial, but also tired and a little stressed about work and travel plans. Despite my best efforts to envision a positive outcome, I kept falling into the “I’m not sure how we’ll do today” line of thinking. I just was not fully “there” for my dog.

Our first two searches of the day were vehicles and containers. Spiffy was the first dog on the line in our group. I made sure he was well pottied before we headed out.

Our vehicle search was 3 vehicles, situated on a slight incline. I believe we had 3:00 minutes (maybe 3:30) to search them. There were 2 hides, and we got them both but one was a bit tricky. Here’s the video of our search:

Next up was containers, in the building right next to our vehicle search. It was pretty straightforward, but this is where I blew it. We got the hide correctly, but then he indicated pretty strongly on a bag with a distraction. I learned later that it was a muffin wrapper. I guess we’ll have to work a bit more on distractions. Here’s our debacle:

After a bit of a break, during which we both took a nap in my car, we headed out to the Interior search. In the first cabin, he went straight into a small alcove area (it was sort of an open closet with almost nothing in it) and looked like he was in odor. He was digging through the trash can so I pulled him off and checked the rest of the room. No interest anywhere but that closet space, but he couldn’t seem to nail it down. So I reluctantly called finish and headed out. The hide turned out to be a high one, and he always has trouble with those. I should have known!

In the next cabin there were 3 hides, and he found 2 of them. One was in the trash can, which was a bugger since he was at the trash in the other cabin, but I figured why not call it, I have nothing to lose. Then he found a chair hide, which I had to help him to detail in order to get. We missed a third hide in a bunk bed. In the third cabin we found one hide in the dustpan and called finish. That was the only room we called correctly.

Our last element of the day was exteriors. We had to walk down a long staircase, which was pretty tiring. Spiffy is 13 years old, so going down the stairs is not so easy any more. There was one hide in this search area, and we got it right away. He showed no interest anywhere else. As you can see in the video, he ate a piece of wood charcoal out of the fire pit, which earned us a fault for disturbing the search area.

We have another NW3 trial slated for November 21st in Kingston, New Hampshire. I’m feeling really good about our ability to prepare for it and succeed! Until then, we’ll continue to have fun at class and at home, doing his favorite thing.

7 thoughts on “The golden years of nose work”